In just a bit over an hour from now, the YoYoFactory Wide Angle Shutter will be dropping.  Both YoYoTricks and YoYoExpert have it listed in their store, complete with an animated countdown.  It’s exciting!  But…what is it?

Both stores include a blurb from Gentry himself to help explain things:

When designing my signature model yoyo Shutter, there was one major goal. To create the best performing, most well rounded yoyo that could handle any trick I throw at it. We were beyond successful with this design. We did it. We created THE most ideal yoyo.

Fast forward 4 years later, Shutter is here to stay. It is the go to yoyo for myself and thousands of players around the world.
A few months ago though, I had a thought. What about when I feel like something a little more extreme? What about when I want to push the boundaries a little more with my tricks and performances and try something unique? Well, there was only one answer. “Let’s make something extreme!” let’s take the most well rounded yoyo on the market and tweak it a little bit. The goal was not to create something better, but something that is simply different.

Shutter Wide Angle is not a Shutter replacement, but rather an addition to the Shutter lineup. For those who want to get a little more… extreme!

So it’s the Shutter…but with more EXTREME added.  Sounds good.

Ok, so how about them specs?  We all love specs. 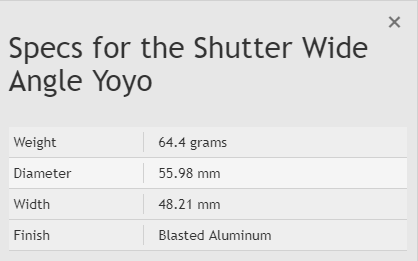 There is no listing or details about the Wide Angle Shutter prominently listed on the YoYoFactory website..  It is mentioned in a “2017 Events” blog post on September 18th, though.  It isn’t specs, but it’s evidence that they hit their target drop date.  Hooray!

So although the exact specs might be up in the air for now, it is undeniable how popular and successful the original Shutter has been.  According to the YoYoTricks.com store listing, the wide angle model is actually the one Gentry Stein used during his performance in the 2017 World YoYo Contest.   That can be considered rather EXTREME, right?

This site uses Akismet to reduce spam. Learn how your comment data is processed.